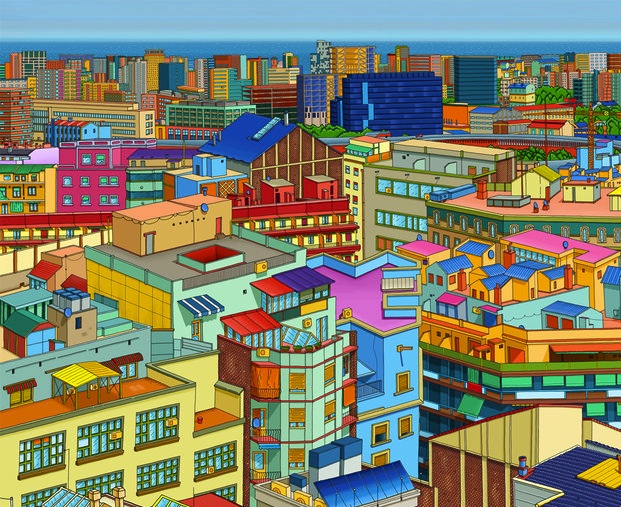 BREAKING NEWS IN MONTREAL: Woman thrown off balcony is pronounced dead at the scene – in other news one million, six hundred thousand and ninety four people not thrown off an astounding amount of balconies

(young artists in denial that they don’t own the mansions depicted in Renaissance paintings grow up to paint mansions; where are apartment building entrances with those random titles on glass doors- The Benmore, The Stallion, L’étranger- in front of heavily stickered mailboxes with variations of, NO FLYERS, NON, and POR FAVOR, HOMBRE, beside faux-marble stairs; we don’t need any more accidental replicas of Atwater’s informally-gated streets; where is Parc X; where are the apartment buildings with balconies of lone chairs and plastic wrap around iron, with shirtless men in sunglasses, surveilling the garbage-bag-placing-process of his neighbours, every Tuesday; where are the buildings with nice lobbies and average apartments; where is cote-des-neiges; where are our bicycles and lines waiting for the bus; where are paintings that embrace the lack of space, not 4 humans to 2 acres but 50 in 2, no wasted space when you connect, right?)

BREAKING NEWS IN MONTREAL: Middle-Eastern man deported for terrorism charges, born in Canada we’re still undecided where to send him – in other news three hundred and twenty thousand middle-eastern-Québecois not charged, although suspected, said to all continue lives in Montréal

(at what point does the state say, alright, busted, we don’t know how to feel like we’re needed when we don’t have a group to protect you from, we just want to feel valued, if you have any suggestions we’re feeling kind of vulnerable, please send them our way, this shit is getting old, we love you)

BREAKING NEWS IN MONTREAL: Black male suspected in armed robbery is presumed guilty – in other news five hundred thousand, three-hundred and twenty four people of colour will continue to live lives in Montréal, despite also being presumed guilty

(Montréal, listen: We love you. We know you can’t really afford to buy us that last round, but don’t worry: My brother is visiting from Toronto. JK 😉 We know you’re the uncle who gave us our first beer, and we get how you’re keeping strong in your middle-age with the festivals, trying to keep the bars open till 6, etc., and, I agree, let’s not talk about the financial district, the disappearing suits thing – it’s cool… We know our neighbourhoods aren’t 100% everyone hanging out together, hamburger, falafel and miso soup picnics, sure, our ethnicities do not interact like they do in the cartoons of our high school textbooks, under “Multiculturalism in Canada,” (or, in the least, white anglos with white francos) but, uh, could we have a festival based on the merit of the musicians, and not Officially Sponsored segregation?)

BREAKING NEWS IN MONTREAL: Alcohol may have been a factor in Tuesday’s fatal crash on the 40, not the congestion – in other news literally millions of cars who have passed that spot on road have been pretty okay since : There is a 0.000001 chance that you will die on the 40 today

(cue the commercial that generally says, hey, death is less fun but buy this car and you’ll have friends and you’ll all laugh to somewhere vaguely rural like past Laval and drink on a dock, even if it isn’t your dock, or look a rock, and uh yeah we paid someone to shoot here, but there are so many docks and so much space away from the city, you can escape all your neighbours!)

BREAKING NEWS IN MONTREAL: Concordia survey finds female students more likely to judge self-worth by appearance than male counterparts – in other news when you force a mold on liquid chocolate it will likely harden into that mold more times than not

(Montréal, honey, we love you, tell your police officers we know that they are good people, tell your protesters that everything will be alright, even if it won’t, let’s hold hands and change the way that we train our police, let’s change the way that our classes get treated by the system that values money, even if it’s tough to insert a heart on our coloured currency, because, baby, we just want to share a Boréale Rousse with you by the canal, come feed me curd while I read you French translations of Richler)