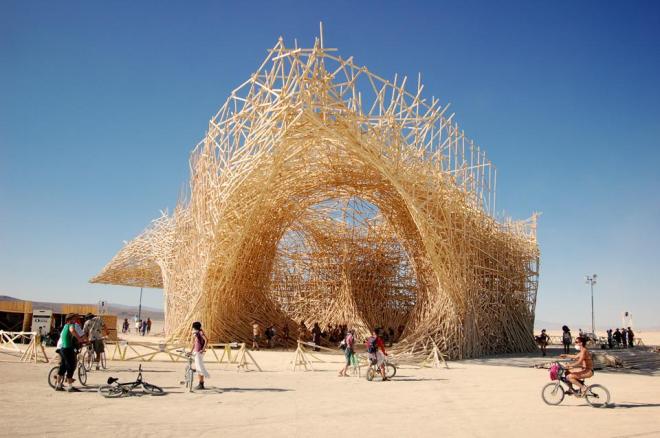 Towards the horizon, a yacht crawls across sand. It’s a trip to watch – a massive silhouette against a Nevada furnace. A rhythm, something dancy and electronic, thumps in the distance. The beat hadn’t changed in six hours. This is what it means to be a DJ in the 21st century, he thinks… toss on the laptop and let that record spin, baby! He would’ve hated it if he wasn’t so stoned. What’s so great about the fucking desert? Some of these mammoth sculptures were awe-inspiring, sure – they were standing inside some sort of terrific wicker palace, after all – but it didn’t resonate with him the way he wanted it to.

“Why bother building it if you’re just going to burn it down?”

“But I don’t dig it. I don’t. It’s like sure, you want to forgo the material limitations forced upon us by a capitalist consumer society. I get that. I can dig the idea of transient art. I’ve read Kerouac… the here and now? I dig that. But this… just seems like a whole lot of work, doesn’t it? I think radical self-reliance goes out the window with the yachts, man.”

“Maybe Burning Man shenanigans are falling victim to the systemic trappings they’re trying to undo: maybe this all started as an escalation of the Haight mentality, the sitting-around-the-campfire-smoking-a-joint-and-singing-kumbaya hippie dippie shit of the sixties, but it’s gone beyond that. We’ve hit a point of market inflation, and it begs the question…have we managed to bottle bohemia?”

“Wasn’t that a Thrills album?”

“Irrelevant and immaterial, your honour. Move to strike.”

“Let’s say you’re right and all of this is becoming a commodity. Let’s say this spectacular monolith, designed and constructed with the sole purpose of being burnt the fuck down, sent back to the scorched earth from whence, has been co-opted by the man. A commodity being something that can be sold…who benefits?”

“Don’t ask a serious question and then fuck about when I offer you a legitimate rebut. What you have is a gathering of like-minded people who want nothing more than to come together, celebrate radical inclusion and maybe draw attention to the fact that the world we live in isn’t the best version of itself it could be, you know? There are alternatives. What’s more wholesome than that?

“Otters holding hands while they sleep so they don’t drift apart.”

“There’s a point in every conversation where you stop being a cynic and you start being an asshole.”

“It’s a matter of serious consideration. Those otters are cute, man.”

“And consider it I will. I’m not worried, though. I was skeptical too, at first. But the flames will wash all of that away. At dawn, when all that’s left are ashes, it’ll be hard to be cynical. You’ll see.”