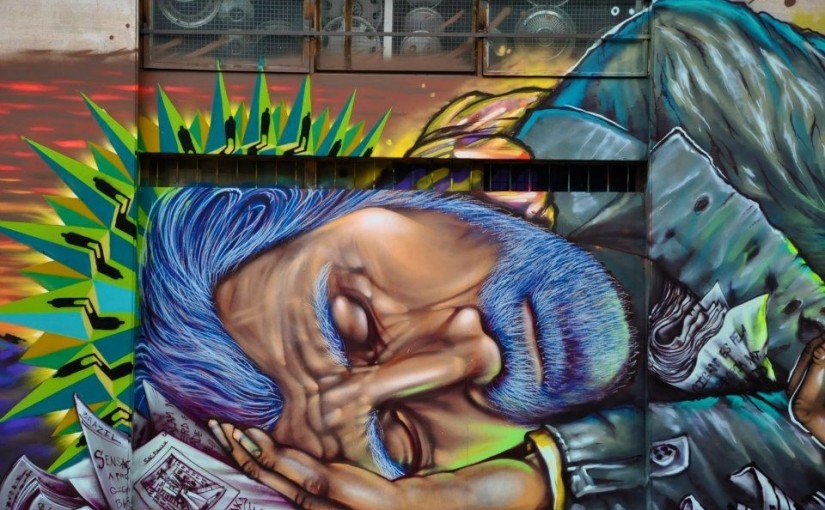 “Look. I know. But I’m telling you, we, like, run in the same circles or something.”

“Which fucking circles are you running in?”

“I dunno, man, just…I’m telling you, I see him everywhere.”

“Give him some cash, man, he’ll leave you alone.”

“Probably. Keep looking forward don’t want to give him the wrong idea.”

The subject of their intrigue happened to be a well-recognized face on this street. His salt-and-pepper beard perpetually caked in sweat, eyes bloodshot, if ever opened, fingernails speckled with dirt.

When he wasn’t pacing the corner of the main street, he would lie curled on the ground, enveloped in a makeshift bed, a mattress formed from warped cardboard and a newspaper pillow.

A Styrofoam coffee cup rest at his feet to collect spare change—its position was far enough from his person so as not to elicit too intimate an interaction between hopeful donors and himself, yet close enough to grasp in the case of a thief lurking uncomfortably nearby. This was his domain.

The men who passed him daily found themselves split between curiosity and repulsion as they, in American Apparel, wondered how one could end up on the streets, and why the man couldn’t pull himself up by the bootstraps “and just find a job,” as they all had done for themselves.

The day he disappeared, those who questioned his absence primarily didn’t know who to confront with their concern, or why they felt they needed an answer in the first place, and never did anything about it.

“With such ease, passersby devalue or dehumanize the lives of homeless people. This story’s focus on the interactions of one man tries to demonstrate a lack of compassion and emphasize the societal conditioning that our culture perpetuates towards those who are not able to work or find a home.”

“Shalak Attack is a Canadian-Chilean visual artist dedicated to painting, muralism, graffiti urban art, and canvases. Shalak  has manifested her artistic expression on urban walls across the world.  Shalak is a co-founder and member of the international art collectives “Essencia”, the “Bruxas”, and the “Clandestinos”.

Shalak also works with several other mixed media approaches such as tattoo art, jewelery, illustration, installation, sound, and video making. In the past ten years, she has participated in numerous artistic projects and exhibitions in Canada, Chile, Brazil, Mexico, Palestine, Jordan, Isreal, France, Belgium, Spain, Argentina, Venezuela, the Dominican Republic, Senegal and recently in Sweden for the Artscape Mural Festival.

Shalak shares her passion for freedom of expression, and has facilitated visual art workshops to youth of under-privileged communities and prisoners in various countries across the Americas, Europe, the Middle East and in Africa.  Her artistic work and community art-reach is rooted in the social and cultural values she received from her family growing up across Canada.  Since then, her most impacting education has been learning from different communities around the world. Public walls has become her favourite place to paint, she uses graffiti as an art form to create accessibility to culture for diverse communities.”

2 thoughts on “On Homelessness: “Walking past””