Untether yourself from the Earth, they’d said. Man was born to fly.

When I was a little kid, I’d run through the meadow behind our house with my arms waist-high. I’d convince myself that the gentle touch of the high grass against my fingers was exactly what a cloud might feel like, if you could reach out and grab it. I still think about that meadow as I run my hands through the greasy droplets of moisture that cloud the air as I drive to work. Clouds aren’t quite as majestic as my formative self liked to believe.

Now, we look to the things that grow for sanctuary. We look for the things that hold fast to the Earth, that dig their roots deep and growl at the bastards who’d dare to try and dig those roots out, to inspire us, just as we once looked to our superheroes as they streaked across the sky. Now, we see heroism in every tree that dares to grow, in every flower that dares to bloom. We recognize the bravery in their determination, in their resolve. How hard it must be to be green in a grey world.

To my left, a massive building hovers in the fog, beyond definition. Concrete but fluid, the building lurks as lights signal to oncoming traffic which sections of the sky to avoid. Strange to think that the sky, once so spectacular in its refusal to be defined, has now been mapped, separated into imaginary but all-too-real geometric spaces given a name and correlating number based on their geographic location (and in this process, had the entirety of its mystery stripped away, like a bad movie that foreshadows too heavily its own ending).

The lights on the building pulse in the morning haze, and as the faint sun begins  to strike the windows of the tower, it seems for a moment to resemble a large flower unfolding as the day breaks. Is it possible that skyscrapers too have roots, dug deep into the concrete that has increasingly replaced the Earth?

Jimmy was a prick for bringing me here. I don’t frequent these sorts of places, at least not since the end of the 21st century when jazz made a big comeback with the space-faring folk. Something about trumpets and saxophones helps when you’re staring out into all that black. It ain’t for me though, jazz- cramped venues that reek of cigar. Charlie Parker aside, whose work any semi-intelligent individual should be intimately familiar with, I hate jazz.

Jimmy kept going on and on about this woman, a jazz singer, and I had to see her.

That’s what they’ve got holographics for, my man, I said. Wear a pin, stream me in.

Left me drinking Jameson at the bar, listening to jazz, and it ain’t all that bad. The band’s minimal, a real stripped back affair. Ivory and vocals. The singer’s got this retro style that reminds me of the post-postmodern infusion of underground Japanese disco into the Can-American consciousness. Lollipop chic. Real big circa 2025, before I left the Rock. It’s the hair, I think: styled, but not overly so. It’s got that outside-the-asteroid belt attitude – think glam-rock meets two months on a space freighter. Works for her.

Wearing one hell of a dress too, a swanky number that looks like it’s patterned after those pre-revolution flapper girls you see on OWC (the Old World Channel). It all adds up to a spectacular sort of woman, one who projects this sultry voice right into my whiskey-soaked skull. Real stellar eyes too… all sorts of devastating, like second-hand smoke, purple, and heavy, and deadly to breathe in. Stardust on her eyelids… listening to her sing, maybe space isn’t a wasteland. Don’t make ’em like this back on the Rock, you know?

I hear her speak, a voice smouldering like the sun outside the tinted window.

What’re you looking at, Earthling?

From the author: “”When I was writing this piece, I couldn’t move past the eyes. They’re captivating, and I imagine I could’ve spent the entire piece talking about them…what you’re left with is a vignette about a man in space who finds himself head over heels for a jazz singer from Jupiter.” 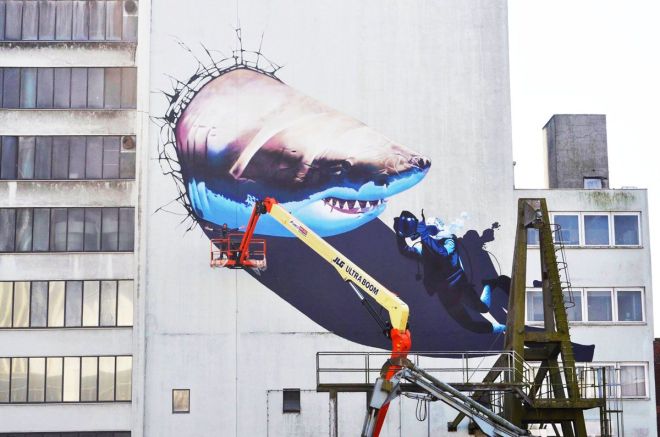 Ben belonged to the last generation that would remember life before implantation, before your boss could send a message at 6 a.m. – to your brain. Some people resisted, at first, staging massive protests… Ben was not one of those people. How could you not see the advantage of having all knowledge in thought’s reach: To pull up any novel by thinking of it, without knowing what it contained?

The glitch – again – there was a glitch – the shattering sound – explosion of steel – burst of seawater – and then – the shark. Snub-nosed, its blue-black hide scarred by a hundred unnamed battles – the shark once again invaded his mind as he stood up to read. It was fitting, at least, for this reading – The Old Man and the Sea- and it tore through the tight prose, scattering the words. He shut down the book and the shark disappeared with the pool of letters.

Briefly, he gave up on reading. It was swimming through his work reports, and, of course, his mistake at trying to sneak a few pages of Moby Dick, but, by Friday, he had to work. Plus, he missed his library. So he called his friend Arn. Arn was a geek. Arn came over.

So this is a problem?

He connected to Ben with a cord between their ears. It had been determined in the early days of implantation that wireless connection between minds was disastrous – all the hacking.

Have you ever looked into a shark’s eyes? There’s nothing in there, man: No soul. There’s nothing about a shark that can be described as even vaguely fucking human. They are the farthest living thing from a human being.

You feel strongly about this.

I’ve always hated them. This totally validates it.

Arn frowned. He wiggled his fingers against his thighs, a physical stand-in for the days when he would have been tapping at a keyboard.

That’s a hack. A really good one.

How the fuck does that happen?

Arn managed to look both empathetic and impressed.

Whoever did this is a genius, and clearly furious at you.

You said it, not me.

So what the fuck do I do?

Way beyond me. Could try to get rid of it, but I might end up trashing your code really badly. You’d have to get re-implanted.

Then you have to talk to Cara, he whispered.

Arn informed him that if Cara could harm his brain like this, she had probably been in there for a while, keeping an eye on him. She had been watching on the weekend before the wedding, he realized, involving someone brought home from the bar, and Cara’s up to that point unused wedding dress, perhaps sacreligious for use, even though they had broken up.

Sunday night, Ben stood up and pulled up a book. Before it went to shit, he concentrated on solidifying the words, making each one into a waterproof brick. It worked for a second: Investing every ounce of his mental strength, straining against Cara’s digital virtuosity, Ben held the shark at bay – literally.

When it broke through, the dynamite effect it normally had on just the book engulfed his entire body. The worst Ben had ever experienced. And there it was, as usual, the shark, with its expressionless mug and its pitiless teeth, the only thing he could see, seeming to smile.

He reached out and touched the shark’s nose – something he had never tried. Its little heart was pulsing and warm in his hand.