Alone in my room, my thoughts are dark
I live in a place where they hate me because my skin is dark.
Whoever says “smile and your misery will be history”
Is lying; the harder I smile the stronger it’s hurting me.

Knees to my chest, my soul crushing into pieces,
Sinking into darkness, happiness is all my heart misses.
Should I even write this; am I ever going to feel better?
I have long been digging from within, looking for a treasure.

Maybe I am not worth anything; should I even keep fighting?
All those thoughts and demons inside of my head.
I call for help, and no one hears me except those monsters under my bed.
I’m asking, to whoever can answer me, how can I survive when my mind is fading?

Those paintings inspire me, tell me there’s still beauty all around me.
I might be sick, who knows? I can only write when life’s hurting me.
Is it ironic to say that the only one who’s always been there for me is loneliness?
I have lived most of my life, lost, scared and confused; I feel better when I’m depressed.

This is what my mind is constantly repeating to itself.
It’s like one side is trying to find solutions, while the other’s killing itself.
I am not asking for much, only need somebody’s presence.
I’m tired of screaming, sitting in this blue room hearing only the echoes of silence.

these words by Jerry Corvil were inspired by the work of Nicolas V. Sanchez

“In The Kingdom of a Star” 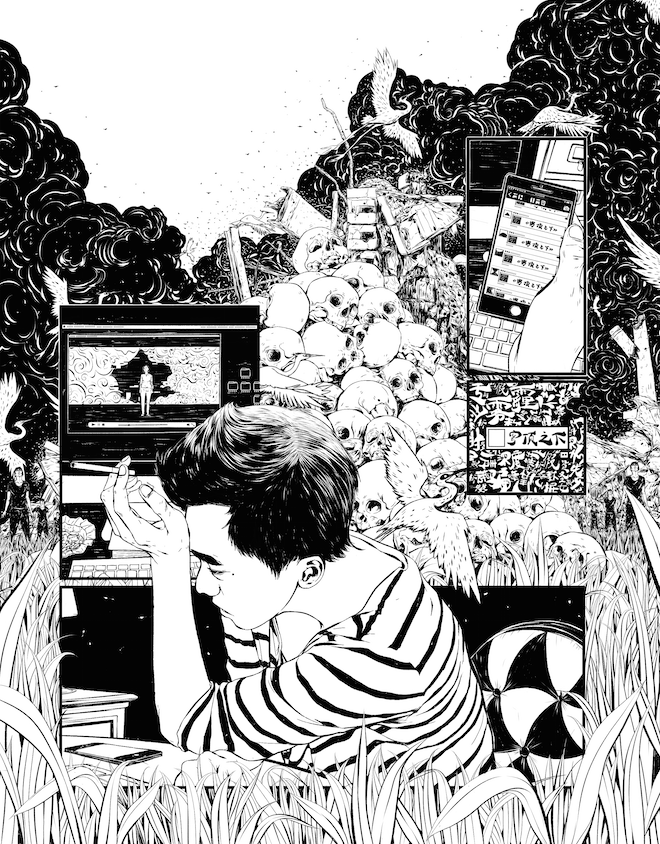 Hot sand and waters blue unfurled before us. The ground was very warm beneath our feet and our heads hung loose and insecure atop our necks. We wore caps to shield ourselves from the white sun. And below, the beach stretched on. I did not know how long we had to go or how far we had come. Beside us, the rim of the sea surged and retreated rhythmically. It cooled the sizzling sand and left foam upon it. The water washed high onto the shore and sent from itself no longer wanted. Its castoffs were shells and weeds, rocks and jellyfish.

There was a wonderfully shaded cove, I was told by a neighbor, not a mile or two beyond our lodging. There, we could swim and repose by the waves. If we got there during daytime we could bathe in it untroubled by the locals, who camp there by night. We had set out midday, so we could return by nightfall for dinner and evening prayer.

But each step toward it hurt. I was concerned for my boy, who had not drunk since we had left our cabana. And I was unsure of how much time had passed since then. As the sun continued to climb above us, my only ambitions were for him to be out of its domain.

I had not known it to be this hot. The sun was unforgiving. I stumbled in the sand and looked at my boy. He let out a laugh and I followed. We remarked to another that it was hot. He ran out to the surf and lay in the water. When he stood, his swimming trunks slipped and made his khaki buttocks bare. His exposed back was a deep merlot. I was wearing a shirt that I removed and asked him to put on.

“But you should wear it.  Drape it about your shoulders, boy,” I said.

“I don’t want to.” He put his hand on his waistline and smeared some blood from his cracked skin. “Pa, I’m bleeding.”

“We’ll be to the cove soon, and there you’ll rest.”

“That is only your imagination, boy.”

I turned around to measure how far we’d come. My son mimicked me. I squinted but could not make out our cabana in the distance. I pressed my hand to my side and when I removed it my boy said he could see my hand as if it were still there. I shifted my gaze toward where I thought the cove was, but as if I were a reflective surface, this direction appeared the same. I did not know where we were and I felt as if cooked.

“If only it were hotter, then I would be more comfortable,” I told my boy.

“I wish it were hotter, dad,” he said, drooping.

I picked him up and we marched toward the cove. The sand blanched my feet. I grew more tired and weak. He twisted in my arms. One or two times, I fell to a knee and dumped him to the sand, smiling at him. I told him I was playing a game, but he did not respond. His squirming had subdued and he slackened amply in my arms. To my left and to my right, behind us and before us, in every tense, I saw the same beach and the same sea, the same earth and the same sky. I walked on in the heat.*

From the author, Jacob Goldberg:

“The man in the image seems plagued with ennui or Weltschmerz.  He’s a millennial; he’s also alone, and there are skulls around him. He looks aimless and appears to have lost something but he doesn’t even know what that thing is or where he should look for it. Interestingly, he’s surrounded by technology. This story is about trying to disengage oneself from the loneliness of the modern world; it’s an attempt to articulate what that thing is that we’ve misplaced.”