L says to T, “Do you ever hear sounds coming from your fingers?” She’s examining the tips of her fingers, the little grooves put there by the strings of T’s guitar. She holds her fingers to her ears. “I swear I can hear a buzzing sound.” L is learning to play. Ever since T told her that guitars have songs trapped in them waiting to get out, she’s been practicing. One day I’ll free them all, she thinks.

“I don’t actually believe that, you know,” T says, “that thing about songs being trapped in guitars. It’s just something some musician said ‘cause it sounds cool.”

L says the real reason she’s practicing is because she wants T to fall in love with her. Then she says, “Just kidding,” because she is, partly, though another part of her isn’t. She’s seen the way he looks at those girls in bands when they go see shows. Bass players, keyboardists, lead singers playing guitar.

L watches YouTube videos of people playing songs on the guitar and tries to imitate what they’re doing. Most of the time the people in the videos talk too fast, or the camera angle is off and she can’t see where they’re placing their fingers. Rewind, pause. Rewind, pause. Find a different video to watch.

T is out seeing bands every night now. He usually calls and asks L to come but then he’ll say things like, “But if you’re tired, don’t worry about it,” or “I think those guys won’t go on until late, so it’s okay if you don’t want to.” So, she stays home and practices until her fingers burn. Sometime after midnight, she goes to bed with aching hands and wrists, and falls asleep imagining her fingers are red and glowing under the bedsheets.

The next week L barely hears from T at all, just one text that says, “Hope your week’s going okay. Let’s hang out soon,” followed by a champagne bottle emoticon. She types, “Okay, sounds good,” then stops before sending it. She erases her reply. According to the formula—take the total time you’ve been dating someone and divide it by two—she’ll forget about T in about a month or so.

On the bus, she examines her white calloused fingertips now permanently indented from the stress of the guitar strings. She thinks of the tips of T’s fingers, remembers how they looked the same as hers do now, dry, white, torn, how they felt rough on her cheek when he touched her face. She places her own rough fingertips against her cheeks then moves them back towards her ears so she can hear the buzzing sound again. She wonders if maybe one of the songs that was trapped in T’s guitar has crawled out of it and into her fingers. Whatever it is, it isn’t a very good song, she thinks. There’s no melody to it. It’s just a bunch of random notes and pitches. When trapped songs are freed, do they need to be decoded somehow?

L is listening so hard to her fingers that she misses her stop and has to backtrack two blocks in the rain to her apartment. When she gets inside, she takes off her coat and hangs it in the bathroom so it can drip into the tub. She goes to the living room to get the guitar but it’s gone. Then she remembers T still has her spare key.

She stands there in the middle of the living room and closes her eyes, lets her feet sink into the floor like she’s standing in an inch of warm water. Her fingers are vibrating now and the room is filling up with the buzzing sound and without even realizing it, she starts to hum along.

words, “Buzz,” by Tariq Hussain, were inspired by the colour of Koka Nikoladze 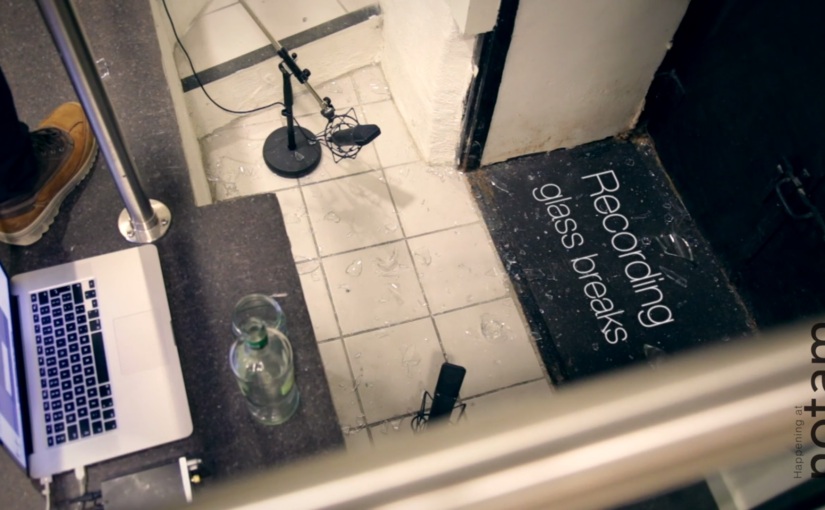 The glass stands tall. Still. Sure. A foil to the thundering chaos in your mind—crash. A few straggling fingers of feeble winter sun clamber through the window, bouncing delicately off the clear vessel. It is entirely transparent, down to the liquid within. Pure.

A resigned hand stretches toward the glass, slipping effortlessly into an old action so long suppressed. Soft fingertips alight on flawless glass—how is it that the union of such smooth surfaces ends in such a crash?

You roll your head back. It lands heavily on the scratchy couch cushion. Your eyes are trained on the ceiling above, pocked with all sorts of nicks and notches. They’re multiplying as you watch, so you shut your eyes, allowing the third glass’s contents to trickle through your thoughts unimpeded. The sadness comes in crashing waves—you will the drink to hasten the ebb of the tide.

The slam of the front door tears you unceremoniously from a fitful doze. Your head swims thickly. The sea hasn’t ebbed; it’s just become murkier. You can no longer see the sand beneath. That used to be comforting—now it only adds to the chaos.

The sun is disappearing now, and none of its final rays manage to cross the threshold of the window. The glass looks different now, empty in the early wintertime twilight. Small. Weak.

You struggle to pull it all together—your disobedient limbs, your weak eyes and lips—to muster up an impression of control. But before you manage to focus your sight and orchestrate a warm smile, he’s already shutting the door to his bedroom. The only sign that he was there is the mail strewn on the doormat.

A new wave wells up, merciless, fueled by whatever placidity you mustered while you slept. You feel its crash resonate through every part of you. You fill the glass again.

His tread is mechanical. His body could walk him home blindfolded. Music is playing loudly into his ears as he turns the corner onto his block, backpack swinging from one shoulder.

His hand reaches into the mailbox and meets several envelopes. He doesn’t have to look to know they’re bills, warnings, notices. His jaw tightens.

It smells like home: air freshener and gin, one a pathetic attempt to mask the other.

A drunken pile of limbs on the couch. Unsurprising. He drops the mail where he stands and shuts the door with a crash, much harder than necessary. He’s done being sympathetic.

much harder than necessary.

From the author: “Recording glass breaks creates the sensation of a process of shattering that doesn’t end. It defies time, moving backwards and forwards, generating a feeling of chaos that can’t be controlled. That feeling of a lack of agency in a situation spinning out of control spoke to me of alcoholism at its true root. The belief that there is agency in a case of alcoholism—depicted here by the son of an alcoholic parent figure—plays into a dangerous stereotype that allows alcoholics to be blamed for their “choices” instead of helped to overcome their addiction.”

They were jittering parallel, his leg and hers. They faced away from each other, tapping in terrified Morse code against the legs of the bed between them. He was shrinking and she was expanding. He was supposed to be the downbeat and she, the trill.

She recalled how his fingers had played her strings. How there was something so excruciatingly offbeat in the way that he’d sped up. He said he liked that sound; she said nothing. There was the pounding of their hearts and the curls of her hair. His hips were rhythmic. She counted to ten, holding onto nothing until he was empty and she was supposed to feel full.

She was his echo, the drum he hit against, a projection of his voice, and she convinced herself to feel empowered to exist solely in the glory of his smile. Too soon it became automatic: a euphoric cacophony of springs and curls.

In the climax, one of her strings snapped. She cried out, he froze. It was unlike her, he thought. She never asked to be hit, she thought. She removed herself from him, shaking, and perched on the edge of the bed.

words, “The Trill,” were written by Annie Rubin: “Koka’s electronic creation made automatic the emotive experience of producing music. This new system, mechanical and intricate, represents a structure of oppression we perpetuate through unawareness or indifference: one in which women are left voiceless and unquestioning. The moment of escape occurs when the woman rejects her role as a void (Cixous) and gains agency through expression.”

the colour and inspiration for Rubin’s work was inspired by Koka Nikoladze’s sound project,