Mrs. Anita Thomas loved her rocking chair. For hours, she would sit, rocking back and forth, humming to herself, blanket tucked neatly in her lap. Sometimes, I would watch her from across the street, as I toted my schoolbag home. She was a creature of habit. Always in the same spot. Staring at her blanket, like a statue.

On a day when I was feeling particularly brave, I crossed the street to get a closer look at Mrs. Anita Thomas. I peeked at her porch from behind one of her neighbour’s bushes, when she spotted me and called me over. Sheepishly, I approached, eyes downcast. Her face was hard and her brows were furrowed. I prepared myself for the reprimanding, keeping eyes on my scuffed shoes. Then, there was laughter? I looked up at Mrs. Anita Thomas, who was wiping a tear from her eye. Her face was soft, her smile seemed to disappear into a sea of welcoming wrinkles. I smiled weakly, not understanding the joke.

“I’m sorry,” she said, composing herself a little. “I couldn’t help myself. What’s your name, little girl?”

I told her and the next thing I knew, I was sitting alongside her nibbling an almond biscuit. It was strange to see her up close. She wasn’t a statue at all. As she spoke, she gesticulated, her chair rocking more severely when she was impassioned. I watched her as she spoke, transfixed by her whole demeanour. That was the day I became a part of Mrs. Anita Thomas’s routine.

Every day after school the scene would be the same: Me, sitting next to Mrs. Anita Thomas, her in her rocker and me on my chair, her weaving together a tale. Every story began the same way. I would take a bite of my biscuit, and Mrs. Anita Thomas would point a dark root-like finger towards the green and red blanket on her lap. Each day, her knobby finger would point to a new section of the blanket. Once settled, she would begin: “This is a story of our ancestors, and it begins with this piece of cloth…” Every time she said this, I would marvel at her use of our. It implied that we were one in the same, cut from the same cloth somehow. That was always my favourite part.

I remember asking my mum where we were from and her responding, without looking up from the newspaper, “Halifax, sweetie.” But that was not the answer I was searching for.

Mrs. Anita Thomas’s stories were always about our ancestors. She spoke of complicated plots involving star-crossed lovers, with mahogany skin and dueling families and traditions that I never heard of. When I pressed my mother further about our family’s origins, citing Mrs. Anita Thomas’s stories, she would assure me that those were just stories. As far as my mother knew, our family was from Halifax. We were Canadian through and through.

Despite my mum’s insistence on our Canadianness, I believed in Mrs. Anita Thomas’s blanket. I imagined our ancestors weaving together the cloth, infusing it with their stories. Knowing the stories of our ancestors made me feel strong. There was an our.

Mrs. Anita Thomas passed and left her blanket to me. I was 12 at the time, still clinging to my childhood, still clinging to her stories. I was shattered when I discovered the “Made in China” tag on the underside of the blanket. In that moment, I accepted my Canadianness like a bitter pill. There was no our.

When my daughter walks in, to see me in tears holding an old red-and-green blanket, I don’t know what to say. She stands in the doorway, peering at me, eyebrows implying an air of concern. After a moment, I spread the blanket on the floor and invite my young daughter to sit on my lap. I take a breath and point to a section of the blanket. I begin: “This is a story of our ancestors, and it begins with this piece of cloth…” 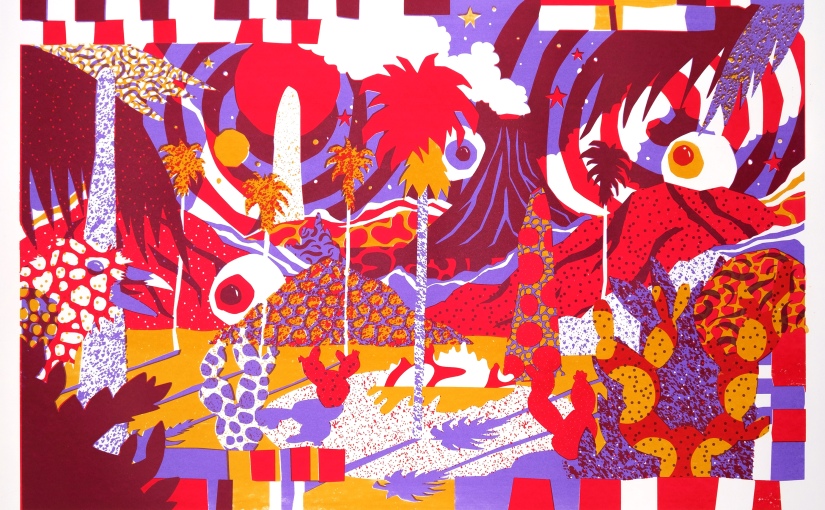 they were written at KEYBOARDS!, a live-writing poetry event in Peterborough, Ontario 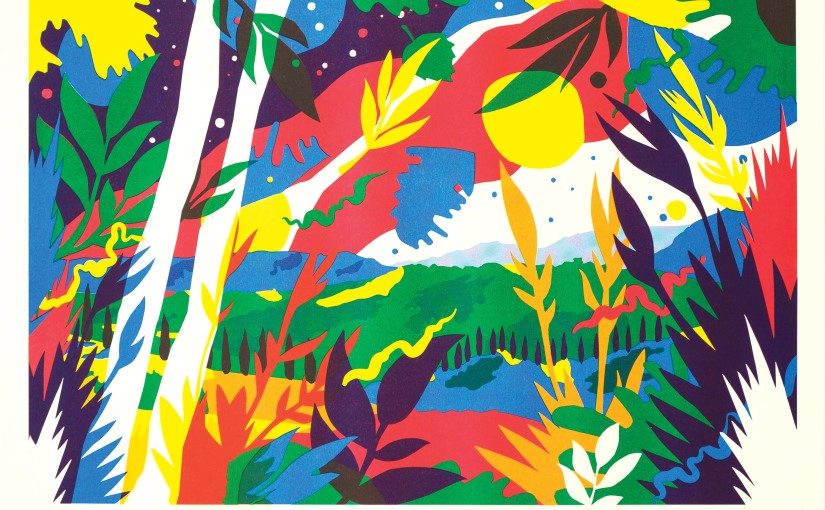 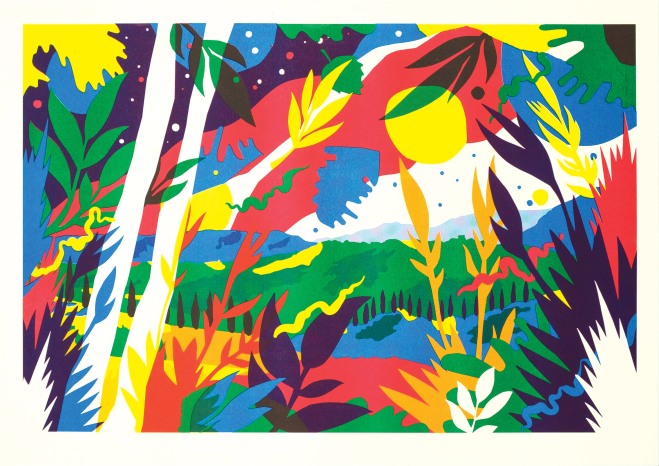 when i tell you that i can’t get out of bed today
i want you to whisper to me
in the greens and blues
of the backyard of my childhood.
i want you to speak to me of safety,
of rolling down a hill
that will always catch you at the bottom.
tell me how the leaves will come out again in march
and fall in september
and the sun will never be more than a few hours away.
please just
lie to me—
and say that i can be that happy
again.
these words by Nahomi Amberber were inspired by the work of Nick Liefhebber

On Wednesday you find a white-crowned sparrow
dead on the front step. On Thursday a halo of grey

feathers on the front lawn. You think mean thoughts
about the neighbour’s cat. On Friday you see him,

a handsome silver-coloured fellow dashing
under the wet cedars. He has no collar or bell

and he probably kills for fun. Studies report
that cats don’t only kill when hungry

and they are the number one killer of wild birds.
You have been watching the sparrows for weeks,

cheered by their haphazard foraging, their hopping,
scratch-scratching on the ground. You listened

to their thin, sweet whistle. You admired their black-
and-white heads, their pale beaks, their bodies

none of the pleasant enthusiasm of breath and noise.
Thursday’s halo of feathers just felt unfair, obvious:

You hate that birds die. You hate that cats kill them.
But you do not hate cats. No, you hate how difficult it is

to feel good about the ways you love the world—
selectively, prejudiced towards the beautiful

and the gentle, towards the ones that remind you
least of yourself, or most. It is nesting season now

and the birds are tending quietly to their young
and you think, If they can do it, so can I.

You rub your rounding belly and you wonder.
Some conservation experts recommend all cats

be kept indoors. Yes, you think. Save the birds!
Let them all return to their carefully hidden nests.

But what do you know of feline happiness? It is
only an accident of desire that you love the birds

first and foremost, that you have spent so much time
imagining their lofty fealty to the sky, learning

their modest dedication to twig and egg and song.
It takes very little for you to feel guilty about the cats

When you see a cat looking out of a sun-filled window,
you do not know if you witness your own longing

or the creature’s—if you fail, as you so often do,
to forget your own feelings, to see the world

as another soul might: all that exquisite light,
that darkness, the life fluttering in the trees. 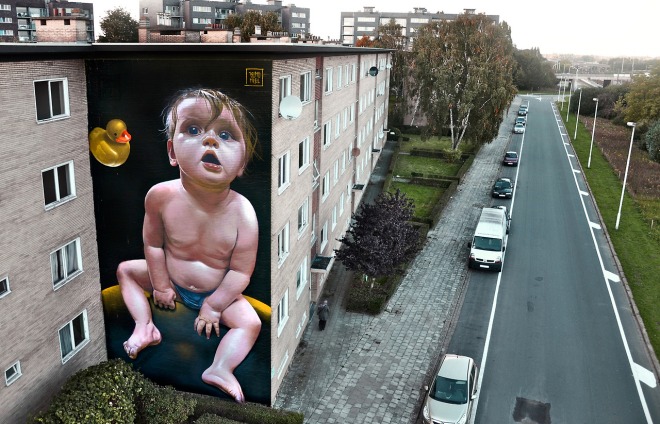 Vinegar hints sweeten when wine ages: The value grows like investments in Congo’s coltan when the American iPhone hit e-shelves… That last sentence shouldn’t infer that the 2013 wishes it was the ’05, any more than the ’05 wants to be the ’13. No. It isn’t that the ’05 thinks the ’13 is necessarily dumber, or more ignorant, saying smug things like I was doing this when you were in diapers, kid. No. It isn’t that the ’13 doesn’t understand the world like the ’05 does, that it isn’t aware of why it likes what it likes because it doesn’t get the same (dated) pop-culture-references as the ’05, that it doesn’t think as critically as the ’05 because of a lack of years of winning or failing or just getting by, figuring out how to survive like an ’05. No, the ’13 does just fine, learns how to shake off pop-culture, soaked with information, wet and hungry for things that it hasn’t seen, new ways of breaking down things felt in high school or ideas cemented at parties, and, with all respect to the ’05- what a year– it might be drying up these revelations faster than the ’05 had, back in ’02. All these numbers… Please consider the following example: The ’13 just had one of those mind-blowingly-unreal revelations about ‘meaning’ and ‘purpose’ that the ’05, well, is going to have next year, a couple years late, but, uh, pull back the vines on this whole speech a bit, it’s really coming off thirteen-ish, isn’t it, let’s balance the thing with the fact that in no-way-not-a-fucking-chance-imaginable does the ’05 envy the ’13 and wish that it could switch bottles to be that age again, and work those part-time jobs again, and pass the first, second, third, fourth, fifth, sixth, seventh, eighth sessions of exams again, to push out the intangible borders of Independent Life from high-school dependencies to capital-A-Adult controls, look at me, I am somebody, recognize me, to build new friendships and relationships and to figure how to tie that intangible border into a rope, something dependable to scale a cliff, tying knots for a net- not a noose, as those providing dependency might fear- pulling up, toward something new. The point is that time has made the ’05 sweeter but it has not made it better. Time has made it not only too expensive but also too bitter for people who like a wine that slaps you in the face at dessert and stains your teeth. Colours on your teeth help you feel that bit more responsible while brushing before bed.