For every man and woman I’ve been sexual with:

word, “An Inability to Orgasm,” submitted by an anonymous writer, 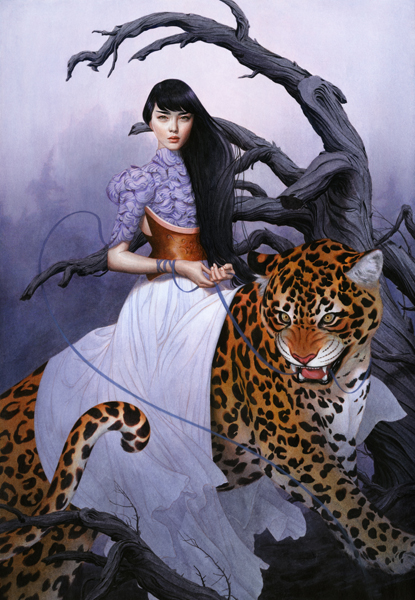 My lower vertebrae clutch and seize in towards centre, bringing my back to sway, chest thrown open. The muscles along my inner thighs grip, and I sense your body surge under me, releasing. That familiar flush of lavender spreads across the temples: I enter the state that lets me unleash my strength on you. This armour is a lie, but it is mine. The taste of metal in my mouth as I plunge into the folds of your body shields me and offers resilience. I do want to reveal myself to you, but slowly.

First, I want you to want me. Tell me over and over how good it is, how nobody has understood your body like I do. I shut my eyes out and feel you. It is not calculated, it is how I have learned to protect myself. I still don’t know how to ask for precisely what I want, while your desire is bare under me.

What I don’t tell you is how much I need this: not just to please you. I am not that generous. Your moans awaken a power in me that I cannot access alone.

The thought of you is not enough: I need to have you breathing against my skin, to feel your heat, to hear you say Please. I am not just doing this for you.

You tell me not to ask permission and I take this in, swallow it, find other ways of asking. I watch the arch of your back, listen for the depth of your breath, testing.

The lift of your pelvis instructs my mouth to move and you tell me not to be careful. You sense my fear and I say, Yes, because we are treading a thin edge. The structure slips, you taste my tears on your face, wrap my limbs around yours. Still trembling I gather strength and move into you. Each tug elicits the sound of more, the scrape of your claws on my thighs, your pulse beneath my teeth.

We catch each other over and over again.

These words by Alisha Mascarenhas were inspired by the art by Tran Nguyen,

From the author: “I wrote this in response to Xan West’s article on myths about “topping” in kink dynamics. West’s piece suggests some of the ways in which tops/dominants tend to be seen as selflessly offering an experience to bottoms/submissives, obfuscating the top’s own pleasures and desires. The physicality of Tran Nguyen’s piece evoked a sense of mutuality within an image that might presuppose power being held by the person holding the reins. I must be dead clear that I am not likening bottoms to animals being ridden (which would further exacerbate existing dichotomies between masculine/feminine and civilized/savage). I am, rather, drawing from the implicit, dynamic power relationship and vulnerabilities being represented through this visual.” 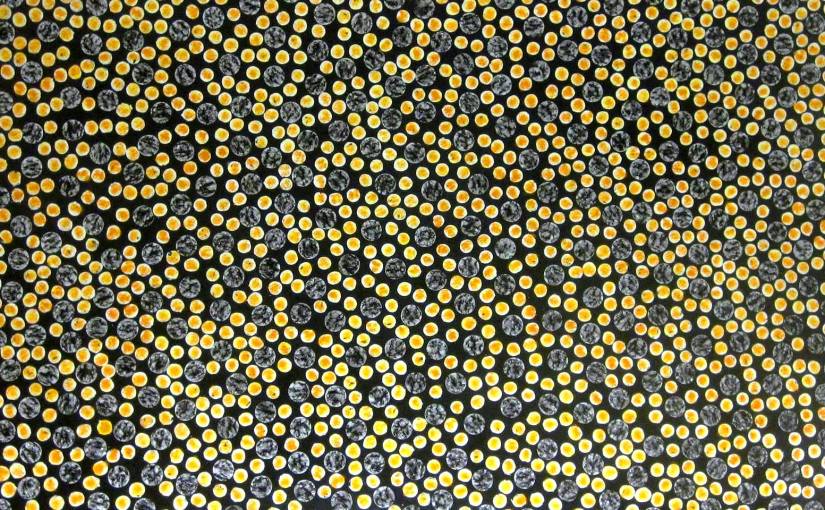 We’ve gone to counseling a few times, but I don’t like it. Tom keeps saying the same things over and over again. Why are you so angry with me? he asks constantly. I want to say, When you start off loving somebody more than you can even imagine is possible, there’s only one way to go, but I don’t say anything.

The counselor asks us to initiate sex more. She says we should both initiate at least twice a week. The word initiate makes me feel extremely unsexy. When we get home from the session and turn off the lights and get into bed, Tom moves down to eat me out and I say I’m not into it and he says You love it and I try to push his head away but he starts licking my clit anyway. I clench my fists and close my eyes tight and I see spots that look like they belong on a wild animal. I tense my whole body as I feel the beginnings of an orgasm, and I am so frustrated I can feel a million bees pushing against my organs, trying to break through my skin from the inside. Tears force their way out between my eyelids and run down my cheeks, and I thrust with my breathy sobs. I come but everything else is still inside me. Tom moves back up and kisses my face and I wonder if he can taste the salt. See, I knew you’d love it, he says.

“This piece made me think of two living things that exist in the same place but will never really be joined together, and the conflict created as a result. So, I wanted to write a story exploring a relationship that has serious conflict, but neither party can really explain where it comes from. Relationships are complicated and confusing and boring and exciting. We are all just animals, in the end.”

“I am an artist and an activist. I know this because I lie awake at night thinking about things in my life, in our world, and I think about communicating them to others. Not in text or song, but in performance, acrylic and instillation. I do not like the way the world is: I want to change it, make it better, loving, healthier, sustainable, tolerant and accepting. At first I thought my two passions of art and activism were disconnected, but as my thoughts came alive in performance, mixed media, acrylic, print making and body painting, I realized they were one in the same.” 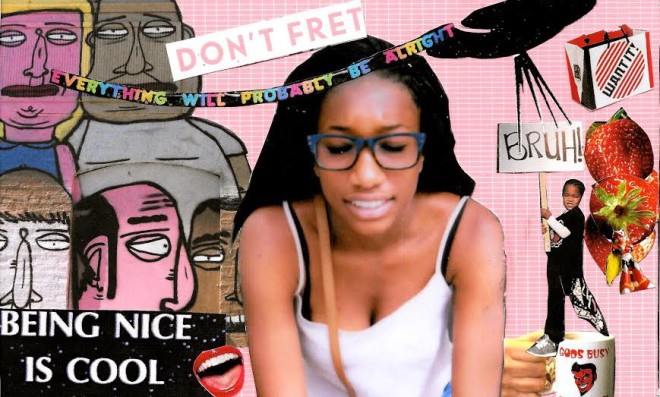 May and Silas lie on the bed. May knows that it would be worthwhile having sex right now—to feel close to him, to remind him that she is not ordinary. Right now she would rather have sex with her substitute science teacher (he had that hair that she liked, it licked up the back of his neck) or the butch woman who had stared at her in the waiting room at the dentist after school yesterday. The staring had made her go red in the face and her vagina spasm in a way that Silas’s gaze hadn’t in months.

Silas turns his slender frame towards her. He is fine and delicate. I’m bored, he grins, let’s cuddle. She grins back and stretches out her arms to pull him in—her arms over his shoulders as always, her body bigger and darker than his will ever be. They kiss and then she pulls back just enough for him to pull back too. Do you want to, he asks, hot breath smelling of closed rooms and wet toilet paper. She pauses. Yes. His eyes coat her in beauty—when he is aroused she feels like he sees her better. She can toss her head and whinny, like a mare, and he will kiss her pulsing veins. They help each other to pull off their clothes: her undies, his exhausted boxer briefs. There is always a laugh here, when her undies are down around her ankles and she is shifting and twisting to fling them off. Sexy, he says.

Moans. Noises she never makes at any other time but that she consciously makes now. Light, quick breaths on his collarbone and light, quick bites of his stretched out neck skin. She doesn’t feel like it until his penis goes in. Then it does feel good, good, like she tells him.

May rolls over, taking Silas with her until he is underneath. She can feel the sweats of each of them slipping and creaking against each other.  She is provocative up here. Silas is beaded lightly all over and his eyes bulge. May resists an urge to reach out and gently move his hair from out of his eyes. This must be over quickly before the sheen wears off and he starts to see the hair on her arms, her pores. Silas tells her he loves her. She feels the warmth of the words in her fingers and her vagina aches just behind and below the labia when she looks down to see his light tuft and her dark one, their tufts, bouncing against each other.

Silas pulls her hips tight in against his own and heaves at her, the sound a bath drain slurping. May breathes out and pulls the sheet across her shave-cut legs. She will bring herself to climax later, will run the tap to quiet her sounds, in the bathroom.

From the author: “I saw this art piece as the collage of a girl going through the emotions of becoming a young adult.

This art piece brought back to me the insecurities, anxieties and play-acting aspects of being a young woman, and I decided to write a story that delved into the mind of a young woman trying to be ‘normal’ and to do ‘normal’ things, such as having satisfying, meaningful sex with her boyfriend, despite the ambiguity and complexity of such an act.
Through my story, I also wanted to get across how much pressure there can be on young women to be ‘nice’, to be ready and willing, and to be relaxed, and to sacrifice their own pleasure and well-being for the sake of men, when this is an impossible and unrealistic expectation. I believe that the various slogans in the art piece, ‘BEING NICE IS COOL’ and ‘DON’T FRET’ are the slogans that young women chant inside themselves, when really it should be okay to not be okay.” 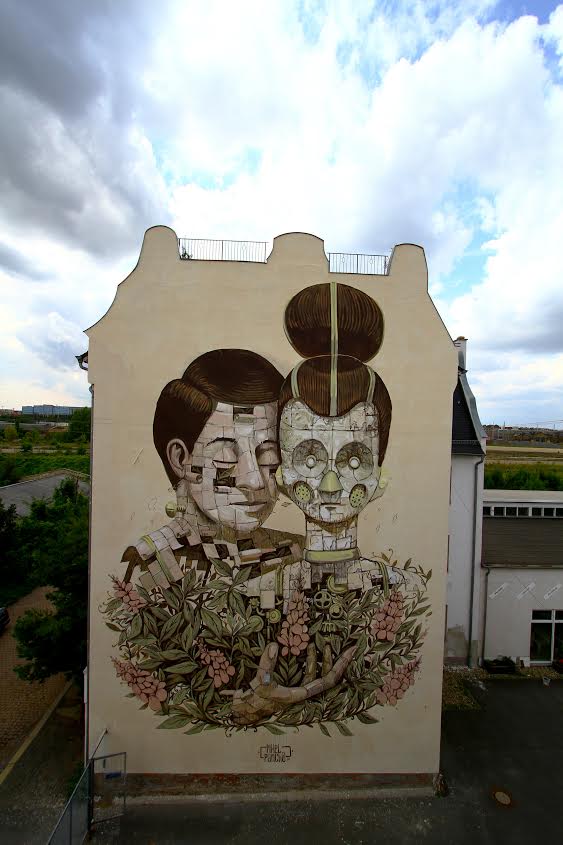 A prickling sensation creeps from the bottoms of her feet up the backs of her calves and thighs. The silkiness of the satin sheets underneath fades to cold cement ground. His left leg is sprawled just below her knees, occasionally twitching with the rhythmic echoes of his snore-embedded breaths. She doesn’t move it. Her legs can do the sleeping tonight. They can have the pins and needles. Since she too, with eyes wide open, is on pins and needles.

When will he be gone?

That’s all she can think about.

College girls always joke about fears of waking up with a stranger in bed Saturday morning.

Her biggest fear on the other hand,

Is waking up without the stranger Saturday morning.

Honestly, it’s not because she cares about them (at least she tries not to). It’s not the who, but the what, that breaks her every time. It’s the reminder that to these thirsty bodies, she’s esteemed for nothing more than the vacant space inside her (and every other female). She’s a Marlboro. Lit up. Inhaled. Exhaled. Until the last bit of romanticism and hope is sucked out and released; foul and toxic secondhand smoke that pleads to be appreciated one last time before evaporating and losing all evidence of existence. Then disposed of. If she’s lucky, she burns out before they’re done (at least she’s left with some dignity). If she’s not, they’re done before she burns out. And she gets stepped on. With a little extra pressure in the toe box, just in case she’s not out with the first step.

Nothing more than a butt.

That’s what she is to them.

Why does she still do it?

However the rare few, like the one sleeping beside her right now, knows otherwise. He knows that behind her indifferent eyes, hidden emotions and sarcastic comebacks:

She’s been hurt, deceived, and mistreated.

She sleeps with both eyes open, because she’s reluctant to yet again lose this game that she thinks she finally knows the rules to.

What she doesn’t know, is that she has finally found someone, who feels the exact same.

Someone who is determined to dismantle her walls.

Someone who plans to patch her wounds with his own skin.

Someone who sees her not as a cigarette, but as a cup of coffee.

The Americano with a spoonful of sugar that he can’t start a morning without.